Check out this story about the Love Locks in Prague!

Really good video on the site as well.

“It is a growing trend in European cities for couples to secure a padlock onto a bridge as a token of love. Some locks feature handwritten or engraved initials or messages on them.

“The reason why the locks are here is because lovers come here to seal their love,” said Prague tour guide Tom Pfieffer.

One can find a cluster of this romantic symbolism on a small pedestrian bridge in the Mala Strana district below Prague castle. The bridge is around the corner from the John Lennon Wall, a graffiti mural dedicated to the man who told the world that “All you need is love.”

Pfieffer said the local legend behind the bridge is one about two star-crossed lovers. Just like Shakespeare’s “Romeo and Juliet,” the couple came from two prominent Czech families caught in a feud. They planned to meet at the bridge for a kiss and when the families discovered their secret, the unfortunate pair was killed.

The legend inspired many locals and tourists to visit the bridge and add their own love lock to the collection to represent their eternal adoration.

“It’s kind of a bitter love story but people come here to share their love and to bond their relationship,” Pfieffer said.

This act of ostension can also be found on a structure on the city’s famous Charles Bridge as well. Local reports say that many of the city’s residents have grown to resent the love lock trend. News in Prague says that authorities have had to cut around 30 pounds of locks from the Charles Bridge.

Despite differing opinions, tourists still flock from all over the globe, searching for that perfect and whimsical spot for their lock.

“I just love that it represents a community [where] everyone comes together in the world,” said Chantal Hebert, a tourist from Canada.

Hebert and her travel companion, Megan Perron, said there is a similar bridge in their home town of Ottawa, Canada, along with other different cities around world.

Both travelers fastened a lock onto the pedestrian bridge in Prague after leaving Paris. Hebert said they chose that location because the one they visited in Paris was over crowded with locks.

Perron painted a red heart on her small, yellow lock and fastened it to another lock’s shackle.

The locks have expanded into a massive bundle, where each individual lock is secured between others, some barely visible as they become hidden by newer ones. It is popular for couples to throw the key into the river or gift it to their loved one as a final seal of their affection.” 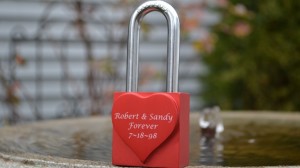 June Summer Special is on!

Buy now and get 10% off your entire order.

Enter the coupon code “ilovelockitzsummer” during checkout and receive the discount on your entire order.

Choose from one of our beautiful color locks and engrave your own personal message of LOVE.

Are you traveling this summer? Take along a love lock and find that special place to leave your lock.

Check out our “specialty heart lock” designed exclusively by Lock-itz. Get the lock and paperweight to remind you everyday of your special person. Great for weddings or popping that special question!

Father’s Day is here and SUMMER is right around the corner. What better way to celebrate and say you care than to purchase one of our custom engraved padlocks. Have your Dad lock up his shed with one of our specially engraved locks.  This week only take advantage of our special coupon offer.

Enter ilovelockitz2014 and get 10% off your order!